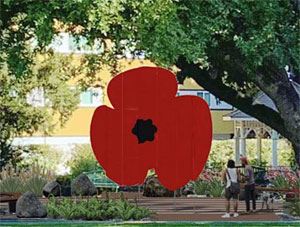 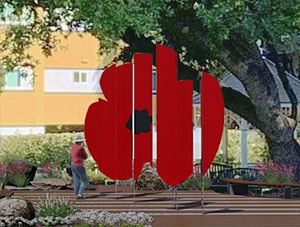 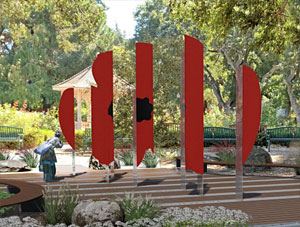 The Fallen Heroes Memorial will soon provide a place of beauty and solemnity for San Mateo residents to remember the heroes who gave their lives on behalf of their friends, family, neighbors, and country.

The Parks and Recreation Commission approved the design and it was brought to the Council, which approved the recognition criteria policy.

In generous support of the project, San Mateo City Council committed a donation of $25,000 for the construction of the Memorial, with a matching gift of an additional $25,000 to total $50,000.

Throughout the years, residents had been inquiring about where San Mateo has formal recognition for our fallen heroes and veterans. While there were six disparate plaques scattered in Central Park recognizing veterans and servicemembers, the City had no formal memorial.

In response to community interest, in 2015, then Mayor Maureen Freschet recommended the creation of a Memorial in San Mateo Park to recognize all of the City's Fallen Heroes including public safety personnel. The San Mateo City Council - Mayor Maureen Freschet, Deputy Mayor Jack Matthews, and Council Members David Lim, Rick Bonilla and Joe Goethals - recognizing the need to honor those that made the ultimate sacrifice, unanimously agreed with the recommendation and directed that a Fallen Heroes Memorial be added to the Central Park Master Plan. An eleven-member steering committee, comprised of City Council members, veterans, retired police and fire representatives, community members, and city staff was assembled to develop the memorial's concept.

The grove of trees adjacent to the large grassy field was selected as the ideal spot for the memorial, and the committee expanded the vision to include safety personnel, police, and fire.

The City of San Mateo is forever indebted to the men and women who defend our country and protect our community, and we are grateful for the overwhelming community support this project has received. Those interested in contributing to the Fallen Heroes Memorial fund may submit their donation to the Park and Recreation Foundation 501(c)3.